During my analytic metaphysics reading group this evening, I was convinced that several ways of speaking of time are reductive and insufficient to capture temporal notions fit for processional accounts. The idea of “time slices” or speaking of “a at time t is F” treats time as a linear dimension, and it does not work for processional models of temporality. The problem is that it treat time as if it were a discrete unit and an event as if it were completely actual. However, time as event cannot be actual else it would be eternal and not temporal. Moreover, time cannot be a discrete unit and be continuous without denying that the past has a constitutive relation to present, which has another constitutive relation to the future.

I have been developing my own Americanist theory of time from studies of Royce, Peirce, Whitehead, Hartshorne, and Cummins. I have a much work ahead of me, and much behind me, and I would like to present a fuller proposal than I have before. See my prior posts: "Emergence, Temporality, and Consciousness," "Thinking Temporality and Process,""Aristotle, Dewey, and Temporality,"and "Individuals in Process Philosophy." 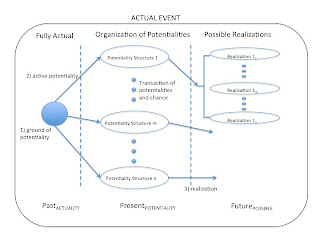 The diagram presumes many prior discussions, including my articulation of “potentiality.” Potentiality is a triad of 1) capacity, 2) activity, and 3) realization unto actuality, all three of which are concurrent. The realization of any potentiality is an actuality that occurs through its activity. Capacity, however, is not necessarily inherent in some singular actuality, but occurs through transactivity. One admitted weakness of this view is that I am uncertain about questions in invoke a regress and ask what is the ultimate ground of potentiality—is it potentiality all the way down?

Above, I represent an actual event as the irreducible unit of time as part of a process. The only way I can imagine representing a notion of time as dimensional, i.e., as having discrete units, is to actualize it. But this reduces time to a mere unit of measurement, or in terms of my model, as mere determinate pastness. Suddenly, explaining continuity becomes a problem insomuch as one event is constitutive of the next.

For those who are wondering, I do presume that time is a local and relative phenomenon, and this there is no "universal t" such that any schematization of time has universal applicability--no a at t is F unless t is something other than a dimensional unit.

I would greatly welcome comments, especially questions for clarification. This is still years away from seeing prime time.