We had already all the content from Cognitio-Studies, focused on initial and developing research, available for free download. And from now on, all the numbers of Cognitio, which is the journal to publish more heavy stuff (let's say so, but we cherish them both equally), are available for free. We accept registrations for referees and the call for papers is constantly open. The most you have to do is to sign up and fill in a form, if so.

** Articles are available in English, Spanish, and Portugese
Posted by Khadimir at 8:44 PM No comments:

Editor Ketner has announced the general availability of the online texts.
Posted by Khadimir at 3:23 PM 2 comments:

From Charlie Hobbs, liason between the Society for the Advancement of American Pragmatism (SAAP) and American Catholic Philosophical Association (ACPA).

*The theme of our session shall be “Pragmatism and the Religious Life” (broadly construed). Proposals of 200-500 words can be sent to Charlie Hobbs at hobbsc@gonzaga.edu
Posted by Khadimir at 3:13 PM 2 comments:

When I explain the difference between analytic and continental philosophy to my students, I give them two points of distinction. The first is geographic and historical. The second, and more interesting, is that continental philosophy absorbed the nascent human sciences in their mutual childhood, while analytic philosophy launched through the breakthroughs of modern logic and ingested the ways of physical science. I do not, as some claim, tell my students that the distinction is between anti-realism and naturalism, or literature and science, or figures & texts and topics and evidence.

I once claimed that the distinction was “sociological” over at New Apps, and many piled-on thinking that I meant that it was “arbitrary” or “merely descriptive but not normative” such that we should collapse the distinction, but that is not what I meant. Reading “sociological” in that way indicates a commonly analytic frame of mind, whereas the continental frame would not separate the contingent ways of human knowing from the scientific attempt at universal truth.  These differing mentalities, fostered by a difference in tradition, are not reducible, and I find the contingency of either not to be a diminishment.

Though I began the study of philosophy within analytic circles, I branched into continental, encountered East Asian, and then specialized in history of continental and American philosophy. As an Americanist—mostly a pragmatist—I find myself to be left out of the analytic vs. continental debates while at the same time being expected to conform to the traditional expectations of each. No, analytic is not “American” insomuch as it is not part of that historic tradition but another.

I feel kind of like Korea—being between both China and Japan—and have militarized against squabbles that I would rather have no part in, but everyone wants me to be on their side, while constantly commenting about how defensive Korea (or pragmatism) is. Put this way, I hope that more interlocutors understand why pragmatism seems a bit defensive. I mean, when was the last time you engaged in a continental vs. analytic conversation and stopped to comment upon American philosophy?
Posted by Khadimir at 10:07 AM No comments:

Thinking back to my prior post about a pile-on I received on another blog--they didn't mean anything by it but we rarely do when we make these mistakes--I would like to make a concrete suggestion about an argumentative strategy that commonly violates hermeneutic charity. I am revisiting it because one of my students did it to another, and the object of the lack of charity called the person on it.

When you use a reductio ad absurdum (reduction to absurdity), e.g., "your argument leads to all these bad things and therefore you are wrong," be very, very careful about how you phrase it. I could follow this advice more often myself! This reductio implies that your interlocutor implicitly or explicitly believes many "bad things," and it is easy to horrify the person with all the "bad things" you are accusing them of believing. Yes, you could say that it is "not personal" and merely "formal," but that is a total cop-out because it ignores how the other person feels about being accused of such things, plus it presumes that the other person was either not intelligent or thoughtful enough to know that those implications were possible.

Rather than fire-off the accusations at once--and yes this reductio often feels like an accusation--I would recommend asking what the person has to say to the implications you would draw. This is the method I try to employ, though I admit that frequently an interlocutor will dismiss my proffered implications as not worthy of discussion. Then, I become more adamant that they need redress, though to be honest I should probably drop the subject at that point, when in fact I rarely do, since the person is not treating the conversation as a true dialog. This is more common in online conversation, but I have also frequently seen it at conferences where a person aggressively defends a position by dismissing the counter-arguments as "not relevant" but offers few reasons beyond those words.
Posted by Khadimir at 10:59 AM 1 comment:

It has been said that new discoveries and developments in the human, social, and natural sciences hang “in the air” (Bowler, 1983; 2008) prior to their consummation. While neo-Darwinist biology has been powerfully served by its mechanistic metaphysic and a reductionist methodology in which living organisms are considered machines, many of the chapters in this volume place this paradigm into question. Pairing scientists and philosophers together, this volume explores what might be termed “the New Frontiers” of biology, namely contemporary areas of research that appear to call an updating, a supplementation, or a relaxation of some of the main tenets of the Modern Synthesis. Such areas of investigation include: Emergence Theory, Systems Biology, Biosemiotics, Homeostasis, Symbiogenesis, Niche Construction, the Theory of Organic Selection (also known as “the Baldwin Effect”), Self-Organization and Teleodynamics, as well as Epigenetics. Most of the chapters in this book offer critical reflections on the neo-Darwinist outlook and work to promote a novel synthesis that is open to a greater degree of inclusivity as well as to a more holistic orientation in the biological sciences.

6 Why Do We Need a Semiotic Understanding of Life? 147
Jesper Hoffmeyer

7 The Irreducibility of Life to Mentality: Biosemiotics or
Emergence? 169
Lawrence Cahoone

10 Of Termites and Men: On the Ontology of Collective Individuals 233
Brian G. Henning

12 On the Ramifications of the Theory of Organic Selection for Environmental and Evolutionary Ethics 259
Adam C. Scarfe

13 Teleology versus Mechanism in Biology: Beyond  Self-Organization 287
Terrence Deacon and Tyrone Cashman

15 Epigenesis, Epigenetics, and the Epigenotype: Toward An Inclusive Concept of Development and Evolution 345
Brian K. Hall

17 From Organicism to Mechanism—and Halfway Back? 409
Michael Ruse

18 Machines and Organisms: The Rise and Fall of a Conflict 431
Philip Clayton
Posted by Khadimir at 8:56 AM 1 comment:

The call for papers for the 2014 Charles S. Peirce International Centennial Congress has been revised:

REBLOG: individuated possibles and the impossibility of eternal objects

From Leon of After Nature

Leon discusses individuation, another popular topic here, but goes far into contemporary continental, where I cannot follow. One thing that I like about his recent posts is that he's displaying a mirroring of ideas in Americanist and Continental thought. Also, he's venturing into religious naturalism, and I'd like to hear more about the religious accounts of genesis. Finally, I think he's right that any "powers ontology" must talk about the creative ground of real possibility, which comes back to the "God question" that has elicited so much controversy in the local blogosphere.

Personally, I am always very surprised at the militancy of some atheists, especially when they focus on the "freedom from religion" at the expense of the development of human persons.
Posted by Khadimir at 5:33 PM No comments:

Here, Leon of After Nature discusses a topic that I have mused upon often and recently. I particularly like his phrase "creative positive addition," although I'll chastise him for "addition." Contingency only becomes realized as an "addition," a concreteness, but contingency has more depth than that. If we distinguish the ontological, the ontic, and the event of becoming (ereignis?), then logical space of reality  (ontological) is distinct from what is (ontic), and the becoming what is given the current cosmic epoch. Contingency in the first case does not appear to be addition, and the it has a notably different sense in the second and third. He may reject the specifics of my characterization, but I do hope to get him thinking on when and how contingency is or is not "addition."
Posted by Khadimir at 4:15 PM No comments:

Pragmatism Today, Vol. 3, Is. 2 (Winter 2012)
Affect, Aesthetics, and the Body: Varieties of Somaethetics 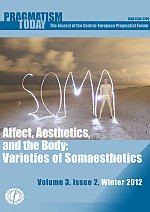 Posted by Khadimir at 1:43 PM No comments:

Royce, California, and the World:
A Conference Sponsored by the Josiah Royce Society and Empirical Magazine

Please direct all replies or questions to: royceconference2013@gmail.com

Royce, California, and the World, a meeting of scholars and communities, will be held August 16-18, 2013, in Royce’s historic birthplace and hometown, Grass Valley, California, in the beautiful Sierra Foothills. The meeting will be held at the Holbrooke Hotel, an important California landmark.

In recent years the work of Josiah Royce has drawn increased attention from scholars and thinkers all over the world. Since its formation in 2003, the Josiah Royce Society has promoted scholarly activities related to Royce’s ideas in a far-ranging series of national and international conferences. In 2013 the Royce Society brings Royce home to his roots and celebrates the 100th anniversary of Royce’s masterwork, The Problem of Christianity. Scholarly papers in any discipline on Royce, applications of Roycean philosophy, and creative extensions of Royce's thought are welcome. Especially sought for this conference are papers on The Problem of Christianity and on Royce’s history of and in California.

ORIGINAL PLAY
The proceedings will include a reading of a new original play about Royce’s life in California, “Beyond Our Mountains,” by Robin A. Wallace.

SUBMISSION GUIDELINES:
Submissions are due by June 1, 2013. Notification of acceptance will be made by June 15th.

FORMAT: Submissions should be in MSWord format (do not send pdf files; organizers must code documents for refereeing and pdfs are not suitable).

INFORMATION: Papers should be prepared for blind review and submitted as an e-mail attachment to royceconference2013@gmail.com. The author's name, institution, e-mail address, eligibility for the Costello Prize (see below), and word count should be indicated only in the body of the e-mail.

PRIZE: The Harry Todd Costello Prize for the best graduate student or recent Ph.D. paper on Royce, as selected by the Program Committee. Those who are currently graduate students or whose Ph.D. was awarded after August 31, 2008 are eligible for the Costello Prize. Papers will be judged on scholarship, clarity of presentation, excellence of argument, scholarship, and the contribution made to the on-going development of Royce's ideas and Roycean thought.